I was nervous about approaching a 4-legged walk for my animation class – the 2-legged cycles seemed like enough! But I think I like 4 legs better – with an upright walk you still have the same number of appendages, but a 4-legged walk everything’s closer together and easier to sync up than swinging arms. 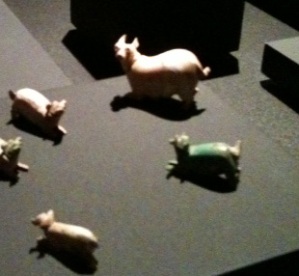 I knew from the moment I saw this little dog statue in at the Museum of Science’s “Day in Pompeii” exhibit that I wanted to see it move. It’s so rotund and its bulging eyes gave it so much personality. It might be hard to see in the photo – I snapped this with my iphone and it was only about 1.5 inches long. It was in a section of the exhibit called “burial objects”,  unearthed from a city that was entirely buried itself.

Here’s my first pass at the animation – I tried to keep the design really simple:

In any case, my instructor suggested that eyes with pupils would be more expressive and he encouraged more structure in the feet, since the version above could maybe be interpreted as some kind of cow. I incorporated the suggestions and added a background pan, so that the poor little dog could gingerly step through the destroyed city:

I am pretty happy with this one, my favorite so far.