So far, my Drawing from the Imagination class is really shaping up to be an incredible challenge (and we’ve only just started the third week of the semester!).  It’s like perspective boot camp, which is perfect, because that’s what I really need.  I think anyone would squirm when faced with the crazy grids,  plotting and intersections that create a formal perspective drawing… but getting over that fear is half the battle. It eventually makes some sort of sense if you stare at the lines long enough.

In our first module, the assignment was to create a one-point perspective street scene. Sounds simple enough, right? Well, I’m not ashamed to say that the homework for that week took me 20+ hours to complete, and even then I had to submit it without all of the details that I wanted. I used reference photos that I took in 2006 of buildings in the town of St Andre de Roquelongue, where Nick’s grandma Michou lives.  Here’s what that first version looked like: 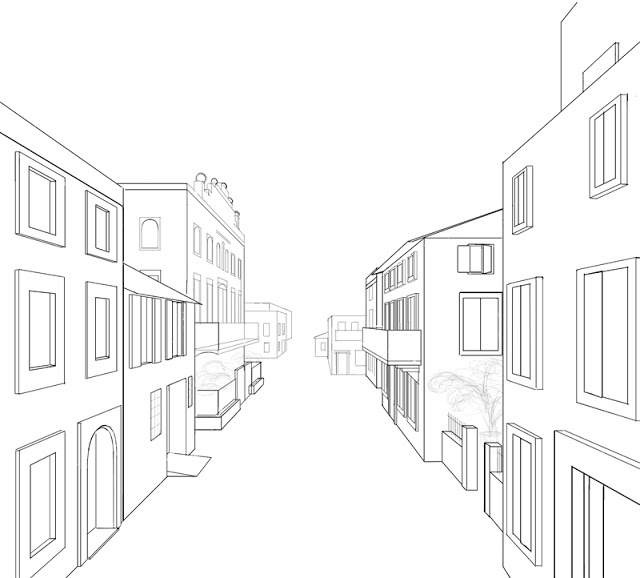 You may be thinking “ok… looks fine..but kind of empty, those windows are weirdly blank, and the slanting rooflines look like they’re made out of playing cards. What took you so long?”

Keep in mind that I had to make a decision before I drew each of those lines… and it takes me forever to make decisions. I don’t like to narrow down my options.

I also blocked out the approximate size/shape of each of my buildings so that I could translate them to the proper perspective. This step wasn’t required but I couldn’t figure out how to get the windows & doors placed otherwise.

So this past week, the assignment was to add shadows. I am happy to say that I did not spend 20+ hours (probably closer to 10), but I’m pretty happy with the result. I was able to add in some window panes, some railings on those balconies, some plants, hills off in the background & electric poles/streetlights. Oh, and that little bench, which I retroactively realized was kind of masochistic for someone who had to add shadows. It all worked out though:

I just realized I forgot the wires for those electric poles. Arggh!!